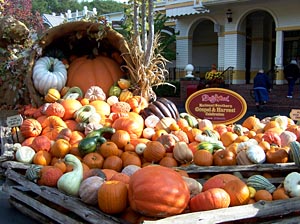 One of the most enduring and popular musical forms in the Southern Appalachian region is Southern Gospel Music. With its uplifting messages of faith and hope combined with tight harmonies and memorable lyrics, Southern Gospel strikes a chord with its audience, both literally and figuratively. From September 30 through October 29, fans of the music will want to spend a day or two at Dollywood Fall Festival, best known as the Southern Gospel Harvest Celebration. There will be free concerts throughout the park with Dollywood admission. Dozens of different singers, duos, trios and quartets will take the stage over the course of the month. Here’s a sampling of what you’ll get to see.

Sandi Patty
On September 30 & October 1, Sandi Patty will appear as part of her farewell tour, the “Forever Grateful” World Tour. Sandi Patty has won 5 Grammys, 4 Billboard Music Awards, and more than 40 Dove Awards. With 3 Platinum and 5 Gold Records to her name, she has been a powerful force in Gospel music since her appearance on the scene in the mid 1980s.

The McKameys
The McKameys will appear on October 7 & 8. This group was organized in 1954 as a trio of sisters. For over 60 years they have been spreading God’s message of love and hope. Over the years the group membership has shifted, but it is still a family affair, with three generations joining in. These multiple award-winning singers hail from Clinton, Tennessee, just a short way from Pigeon Forge.

Greater Vision
You’ll want to see Greater Vision on October 19 & 20. For a quarter of a century these men have singing together with great success. Singing News Magazine has named Greater Vision Gospel Music’s Favorite Trio. Rodney Griffin, baritone, has been named Songwriter of the Year every year since 1998. Gerald Wolfe, lead singer and emcee of the shows, has been named Favorite Male Vocalist seven times. 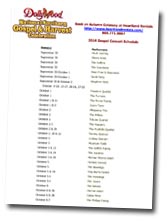 Jeff and Sheri Easter
At the end of October, Jeff and Sheri Easter will appear, singing on the 28th and 29th. This couple has been singing together as a duo since 1988. Now they are joined by daughters Morgan, rounding out the vocals, and Maura Grace, who always bring a smile to the audience’s face. They have received numerous awards from across the categories and make frequent appearances on the Gaither Homecoming Tour.

In addition to all these Gospel music artists and many, many more, this annual fall festival also brings unique artisans to Craftsman’s Valley selling their creations and some even demonstrate their skills. Your day at Dollywood will be filled with music and tradition from start to finish.  This festival will lift you up!  Visit Dollywood online to purchase your 3-day fall festival tickets for $99.