Here in the Smoky Mountains of Tennessee, we just can’t get enough of cool cars; or is it that cool cars can’t get enough of the Smokies? We think it’s a bit of both! Since the Smokies are such a great destination for family vacations and offer some of the best scenic drives in the nation, it just makes sense that car enthusiasts gather here year after year.

Ponies in the Smokies brings four days of Mustangs to Sevierville March 29-April 1. This car show will include a kick-off party, “Shine Run,” cruise in, family friendly Shine Party, vendors and swap meet. Book your mountain cabin early with Heartland Rentals to make your car show weekend both fun & affordable!

The events officially begins Wednesday evening with a kick-off party at Hard Rock Cafe Pigeon Forge from 5-9 p.m. Details are still in the works, but you can bet you’ll have some great food while mingling with like-minded Stang friends. 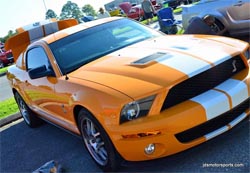 On Thursday, gather in the back parking lot at Nascar Speedpark from 5-9 p.m. to turn in your Shine Run cards and have some racing family fun with special discounts, food and of course, checking out all those cool cars parked near yours. 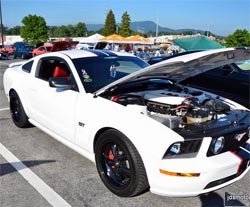 The Sevierville Convention Center opens its doors from 8 a.m.-8 p.m. for the Friday & Saturday Ponies in the Smokies car show. While cars will be on display in the convention center’s adjacent parking lot, you’ll also find the “Mustang Corral” featured car exhibits inside the convention hall. You’ll see prime 1964 to 2017 models! Vendors will be set up and judges will be in place both days, with the awards ceremony for Top 75 and specialty awards being held on Saturday.

Although the convention center is open all day for door prize giveaways and awards, Saturday is the All Ford Cruise In. This cruise is open to 500 all Ford Chassis cars and trucks.

Don’t miss four days of Mustangs in the Smoky Mountains!