The Christmas season around the Smokies will kick off with a weekend of parades in Gatlinburg, Sevierville and Townsend. Like each town, each parade has its own charm.

Gatlinburg, Friday December 2
The series of parades begins in Gatlinburg on Friday, December 2 at 7:30 p.m. The 41st Annual Fantasy of Lights Christmas Parade will start at traffic light 1A on Hwy 321 (East Parkway) and will travel to Hwy 441 (Main Parkway) where it will proceed from light #3 to light #10.  Although you’ll have plenty of space along the downtown Parkway to choose a viewing location, you’ll want to get there early! 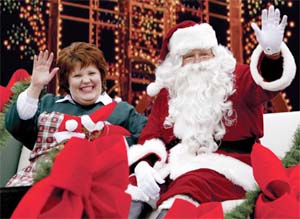 The spectacle will feature everything you’d expect in a Christmas season parade: floats decked out in holiday decorations and lights, bands marching along as they play seasonal tunes, giant floating balloons in the seasonal spirit, equestrian units showing off their horse skills, and, of course, the man in red himself. Santa Claus will certainly make his appearance to delight the children.

To all of that Christmas hoopla, add the beauty of millions of twinkling lights. The parade route will follow streets lined with bulb after bulb after bulb of brilliant light to make the season sparkle. The combination of light show and parade makes the Gatlinburg Fantasy of Lights Christmas Parade a must-see for the season.

Sevierville, Saturday December 3
The day after Gatlinburg kicks off parade weekend, the city of Sevierville will host their own downtown. On Saturday, December 3 Sevierville’s 54th annual Christmas parade will bring the traditional hometown feeling to the middle of the downtown area. The parade will begin at 11 a.m., so you’ll have a chance to grab a hot breakfast at one of the many area pancake houses before you grab a spot along the parade route. You’ll get the best view of Saturday’s parade if you pick a spot somewhere on the Forks of the River Parkway or Court Avenue in historic downtown Sevierville.

Sevierville’s parade will feature marching bands and floats, pageant winners and baton twirlers, and, in what must be an already busy weekend for him, Santa. That’s right…Santa will be staying in the area over the weekend to make an appearance in both parades.

Townsend, Sunday December 4
Over on the quieter side of the Smokies, Townsend will round out the weekend with a “Back the Blue” Christmas parade on Sunday, December 4. The family fun parade will follow a roughly two mile route along the Parkway in Townsend from the IGA to Nawger Nob Village.  The parade starts at 2:30 p.m.

There’s nothing like a parade… and there’s nothing better than 3 in a row!  If these don’t kick your holiday spirit into high gear, you might want to add a self-guided or trolley ride tour of lights each night.  Read more about Gatlinburg’s Winter Magic ride of lights or choose to take a Sevierville or Pigeon Forge self-guided tour.